Ok, so. I have spoken before about my unending love for Jamie at Home, and back in February I watched the pizza episode and promptly felt the urge to make dough from scratch. Hurray! It’s so easy! (Note: I had a tremendously bad day leading up to this attempt.) 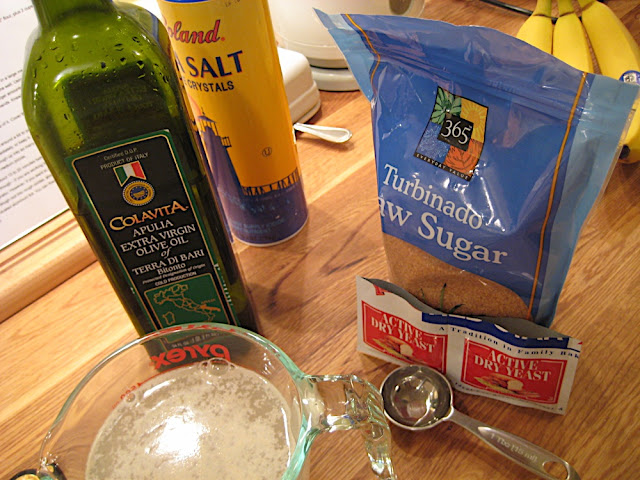 Ok. So you’re supposed to sift the flour and salt together into a mountain on the counter. No sweat! I am a brave person who will go ahead and work straight on the butcher block. No fear! Mountain, ahoy! 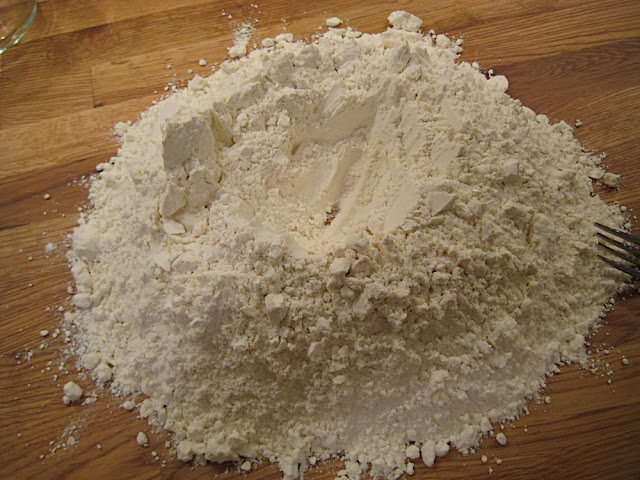 Now, that photo does not accurately depict the towering majesty of the 7-cup flour mountain. It was tall and steep. Back to the recipe:

“In a large measuring cup, mix the yeast, sugar and olive oil into the water and leave for a few minutes, then pour into the well. Using a fork, bring the flour in gradually from the sides and swirl it into the liquid. Keep mixing, drawing larger amounts of flour in, and when it all starts to come together, work the rest of the flour in with your clean, flour-dusted hands. Knead until you have a smooth, springy dough.”

Sounds easy enough, and Jamie made it look like a cakewalk on the show. Proceed: Liquids mixed with sugar and yeast: 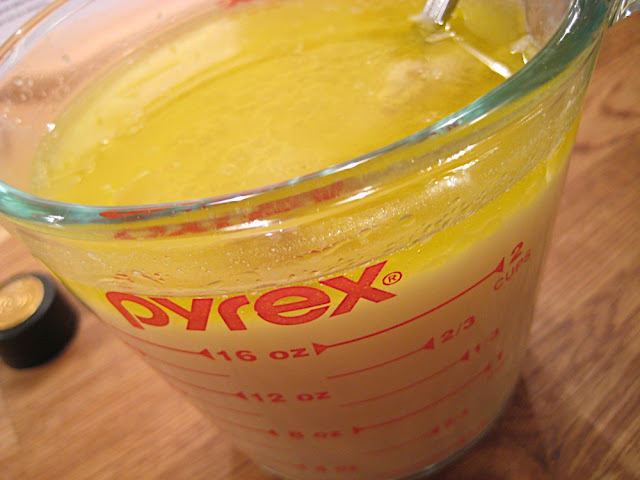 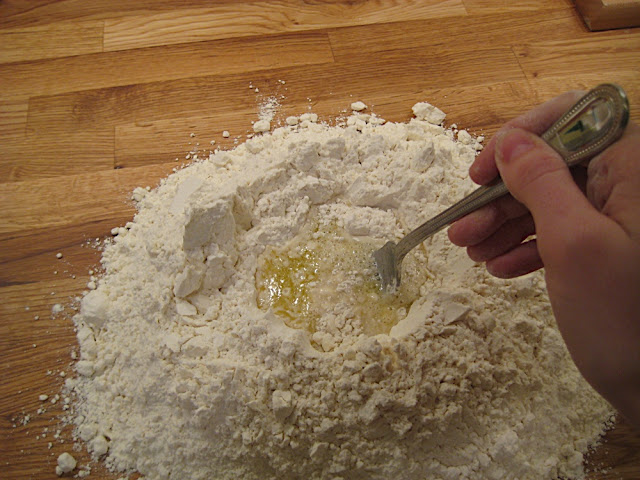 Here’s the important part: Get cocky and pour in too much liquid at once, collapsing the walls of the too-tall mountain and flooding yeasty-oil-water down the dishwasher and your pants. And socks. And under the baseboards. Stand stock still while it gushes over, before fitfully trying to shove flour into the liquid to stop the onslaught. Grab paper towels to make a moat, then take a photo that doesn’t come close to portraying the chaos: 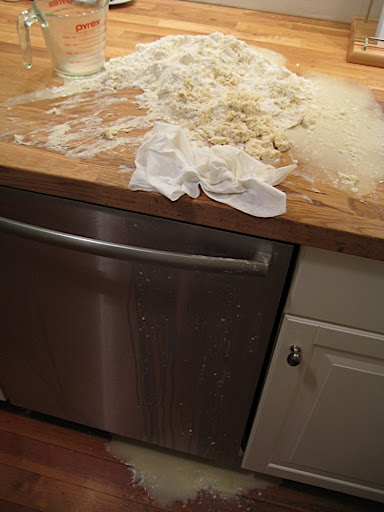 (Aren’t I brave, giving you the warts-and-all view into my kitchen?)

Take stock, recognizing that you have used nearly all of the flour in the house, all the yeast, and you don’t have an alternate plan for dinner. Decide to soldier on, mixing what liquid is left on the counter into the flour and then adding additional water and kneading until, miracle beyond miracles, the dough pulls together into a gorgeous, silky smooth ball. 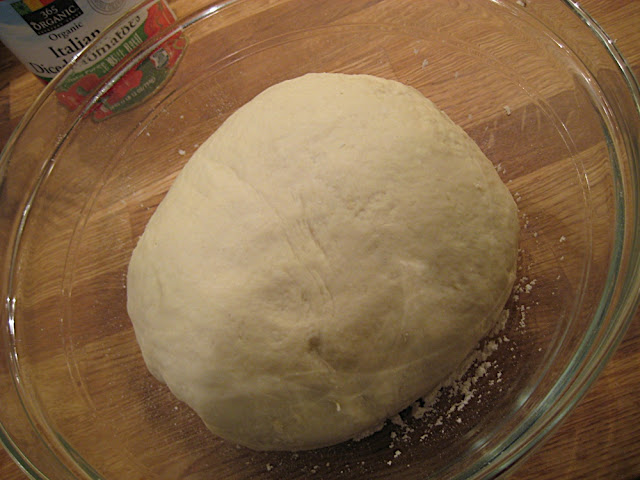 Set it to rise while you pry off the baseboards and scrub yeasty flour paste off the inside of the cabinet doors.

Now, back to the original plan!

“Place the ball of dough in a large flour-dusted bowl and flour the top of it. Cover the bowl with a damp cloth and place in a warm room for about 1 hour until the dough has doubled in size.

Now remove the dough to a flour-dusted surface and knead it around a bit to push the air out with your hands – this is called punching down the dough. You can either use it immediately, or keep it, wrapped in plastic wrap, in the fridge (or freezer) until required. If using straightaway, divide the dough up into as many little balls as you want to make pizzas – this amount of dough is enough to make about six to eight medium pizzas. “

Fine! The dough rose, though maybe not quite as much as normal: 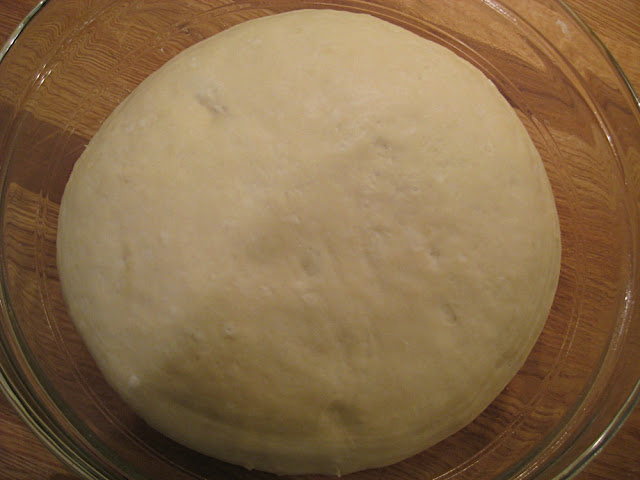 I froze half and made the other half into four pizzas: 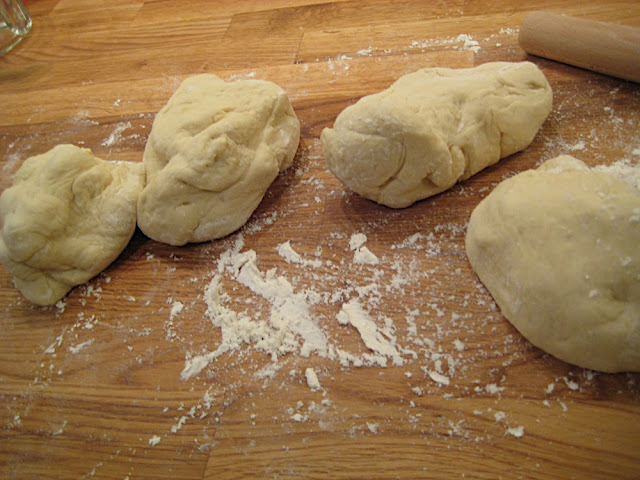 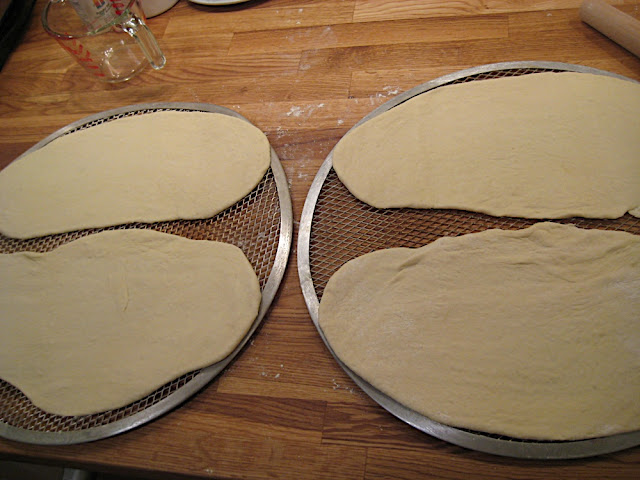 I made half with flat edges and half with pinched crusts like my mom does, to see which I preferred. (Note: The Food Network version of the recipe doesn’t specify baking time or temp. I cranked my oven to around 450 and just watched the pizzas carefully; I think they took about 10 minutes but I could be wrong.) 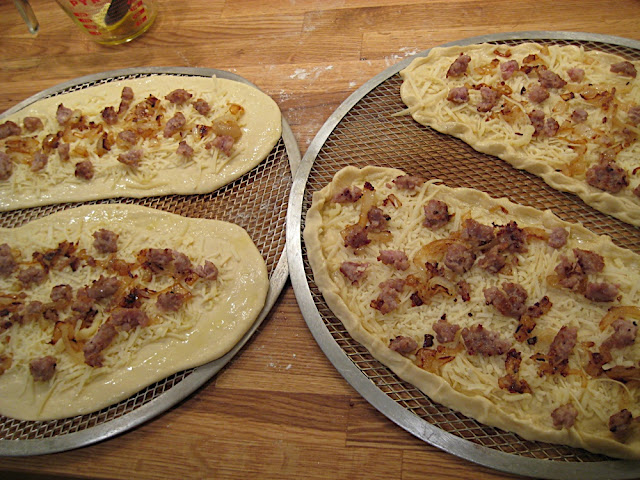 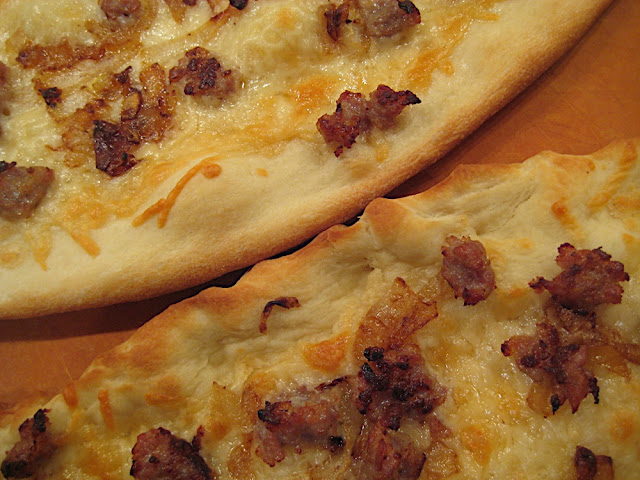 And dinner did eventually get served. Without the 45 minutes of cleaning up the kitchen, it would have been a really easy process. 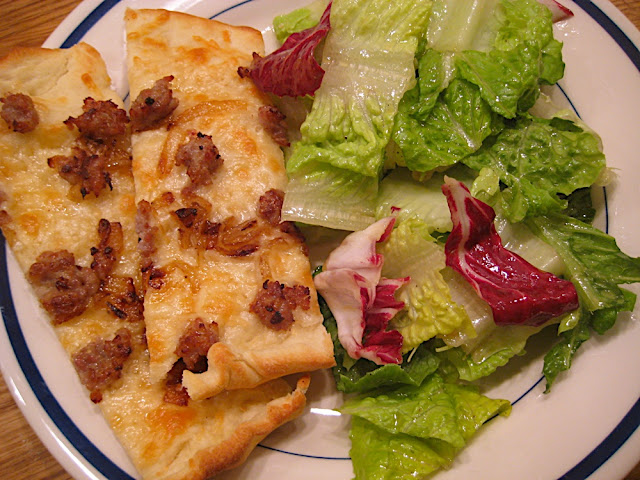 (BTW I think I’m over white pies, at least with the slightly-dry cheese blend I have been using. The other half of the dough got slathered with various sauces, to be explained in a future post.)

(Also, I’m totally uninspired and haven’t been cooking much. Is it just the late-winter doldrums? Anyone else feeling it, too?)

9 thoughts on “One-stop-shop for amazing messes”