While my parents were here (“Back East,” as we always said when I was growing up) we spent two nights with my aunt and uncle at a lodge they were renting on Great Pond in Maine. The weather cleared for us and we got to splash around in the lake and eat on the porch, and my dad and uncle did quite a bit of fly-fishing from the old canoe. The lodge is affiliated with a venerable and very cool boy’s camp, Pine Island Camp, which my uncle and cousin both attended. We got to have lunch there and tour the island, and it made me hope that I have at least one son one day, so I can pack him off to a mosquito-free island in a Maine Lake to canoe and row and sail and play crazy games and do carpentry and otherwise step back in time. I liked that there seemed to be a lot of emphasis on artistic achievement–music, painting, carving–as well as sports. Unfortunately I didn’t have my camera that day, but Dad took a few shots. (The photo up top is of a group of boys rowing past our dock one morning.)

The campers still sleep in tents on platforms, just feet away from the lake. Dad was smart enough to take a photo of an archival picture to show how little has changed in 100 years: Other than that little trip, we mostly just cooked and ate and relaxed by the lake. We were visited by a distinctly un-shy loon: Despite appearances, the green canoe was seaworthy: Bug spray aside, this photo could have been taken 50 years ago: And if this is basically my dad’s favorite kind of view (ok, he’d prefer a burbling trout stream, but framing anything with a fly rod helps): I definitely captured his favorite way to shave! Oh, and Mom and I cooked dinner one night! After leaving the lake, we drove on back roads over to a resort in NH where my mom worked in High School. On our way there, we passed Douin’s Market, which looked like a convenience store, but sported a sign saying something like, “Home of the Brownie Whoopie Pie, STOP or you’ll regret it.” I yelled “STOP!” and everyone thought I was kidding. Once I made it clear that I take threats of brownie whoopie pie regret seriously, Dad and I ran in. He had the presence of mind to take an iPhone picture of a sign advertising the 10-lb Brownie Whoopie Pies Douin’s makes for parties: We purchased the normal sized one (perched on the giant one in the previous photo), and devoured it with our picnic lunches. OMG, you guys. I like a whoopie pie as much as the next girl, but most of the time the cake seems to be sadly bland or dry. This subbed in the best brownie I’ve ever tasted–incredibly chewy and chocolatey and delicious. The market also makes a variety of normal whoopie pies, as well as some with peanut butter filling or pumpkin cake. In case anyone will be in Maine soon, DO NOT MISS:
Douin’s Market, New Sharon, Maine
Home of the Brownie Whoopie Pie

Finally, on our way home Sunday we went to the very famous Polly’s Pancake Parlor in Sugar Hill, NH. We called ahead to get on the list, so we didn’t have to wait long. Polly’s is well-known for serving some of the best pancakes anywhere. Your server cooks them to order, and brings three at a time, then your next three, fresh and hot, when you’ve finished those. I chose a sampler so I could try a few of the many, many options–the best by a long shot were the cornmeal blueberry (the middle pancake in my stack, below). The smoky, crisp bacon and the maple spread were my two favorite things, though! Also the placemats, maple leaf shapes cut out of red vinyl, and the mismatched chairs all painted bright red. Great, now I kind of want bacon for dinner.

It was months ago that I saw a chili recipe on Oh Happy Day and thought “must make.” And, actually, it was months ago that I made it–oops! Jordan called this “Pepper’s Famous Chili,” and I think it’s a great starting point to play with. I’ve made it a couple times and it is a bountiful and delicious recipe, extremely filling.

Brown beef and drain liquid. Crumble beef and put into a large pot mix in all other ingredients. Cook over low heat stirring every 15 to 20 mins. for 2 to 3 hours. (You could also use a slow cooker.)”

I bought everything at Trader Joe’s, so the sizes of the cans of beans were a bit varied, but I don’t think it matters. And one time I made it with stew beef instead of ground beef, with moderate success–you need more meat, it turns out, and Tom was visiting and we ran into a bit of a problem while browning the meat (too much liquid, too small a pan), so it wasn’t as flavorful as it could be. Both times, I made cornbread muffins to accompany the chili, first using an Epicurious recipe, then ceding control to Tom for his favorite recipe. 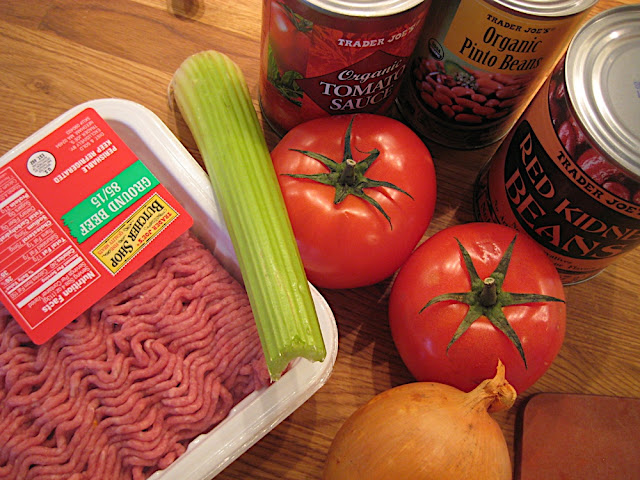 The fresh stuff livens up all those cans of beans and sauce: 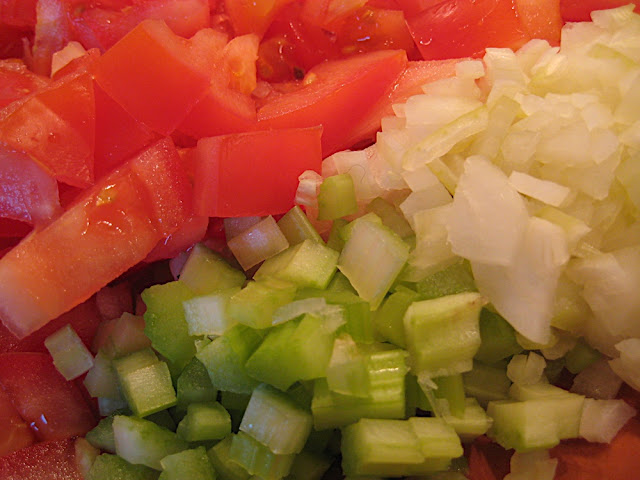 Honestly the cooking process doesn’t present many opportunities for photos. You brown the beef, then throw everything in together for a couple hours. (Incidentally, I didn’t have chili powder and cumin but I thought I did. I ended up using a taco seasoning mix from the awesome spice shop in Inman Sq., which worked just fine.)

Here’s the result with ground beef: 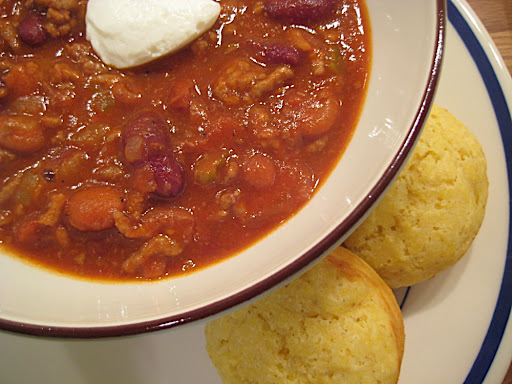 Good stuff, easy to make. Not bad! I must say, we were eating leftovers for what felt like a year. I think next time (and it took me two batches to think of it; I am so braindead lately!) I’ll freeze half.

Oh man, while Tom was visiting we hit the slightly pathetic array of thrift stores in the neighborhood, as per tradition, and the one good find was a  sweet white-enamel 8-inch Copco cast iron frying pan for a couple bucks. It was *filthy* but we soaked it in soapy water and scrubbed it with barkeeper’s friend and fine steel wool, and now it’s in really great shape. Love. 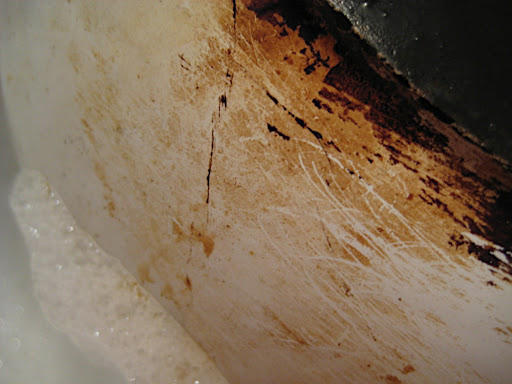 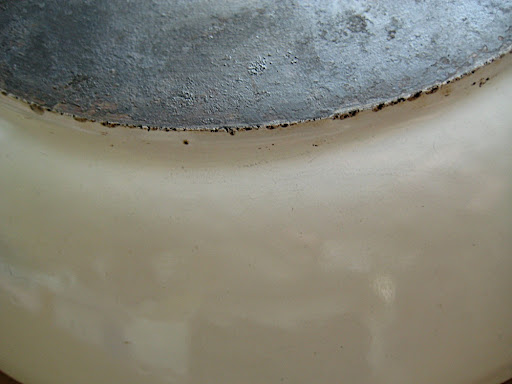 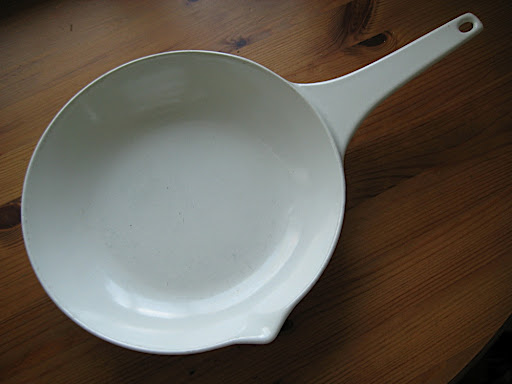 Note: Why yes, I’m posting things I cooked in March, why do you ask? The good news is that I’m hoping to pull together a couple posts to publish while I’m away next week. In Italy. HURRAY! (Also? Panic. I get so freaked out before trips because I loathe packing, never feel like I have the right clothes, and actually never do have the right shoes. I’ve got a fresh sketchbook and some maps, we should be fine!)