OMG, you guys. First of all, I’m only 1 week behind once I finish this post! But more important to note is that this is my biggest PSA post ever. I almost got pretty badly hurt but lucked out and am just fine, so READ ON to find out how not to be a jackass.

First of all, the week’s goodies: 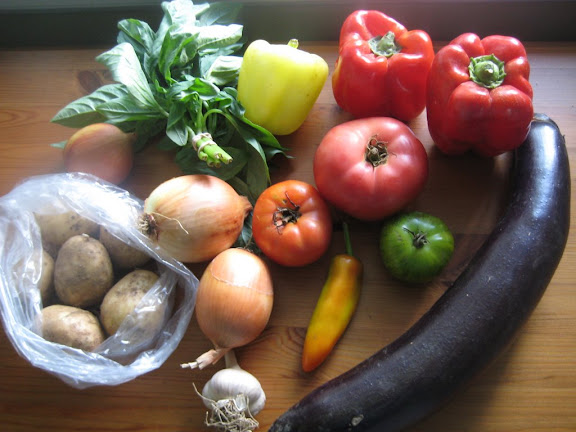 I had half a loaf of rather dull french bread sitting around getting stale, which led to a hankering for panzanella. I was on the phone with my mom, so she gave me a recipe for dressing that she usually uses; I dug out a cucumber that was still languishing in the produce drawer, and I decided to adapt her recipe by replacing fresh bell peppers with roasted. Because….I thought it would be fun, I guess.

I fired up the broiler, which in the Viking all-gas stove is quite a sight to behold. It’s infrared or something, and gets CRAZY hot, with a solid panel of tiny flames, etc. I daydreamed about croutons while I washed my peppers and popped them in a dish. 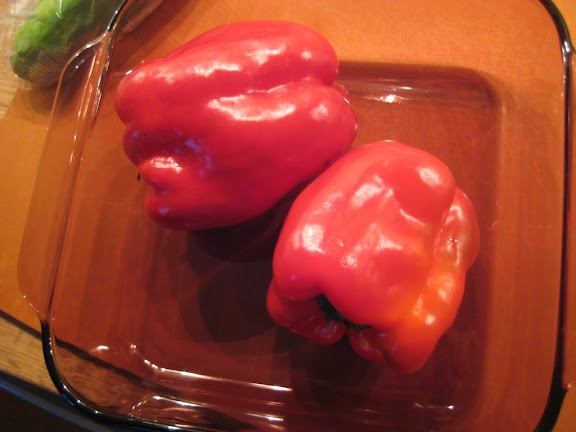 Does anyone spot the oncoming apocalypse?

Into the oven they went, where they blackened a hell of a lot faster than I expected–I think instructions that say to place your peppers 4 inches from the broiler do not take into account the CRAZY FLAMES of my oven. Next time I will stick to the middle rack so the peppers can soften a bit more before totally blackening.

I checked them a couple times, flipping them around to turn sooty on all sides, and then when they seemed about right I pulled them out, set the pan down on a baking sheet that was waiting on the stove for croutons, and stepped back towards the counter to grab my tongs. 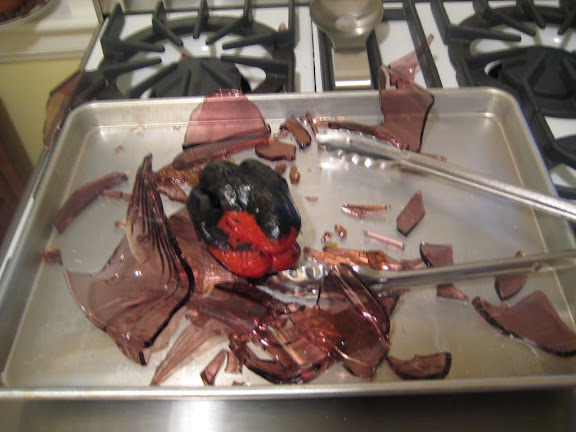 Note that one pepper is missing. That is because it blasted a few feet away in the explosion. Seriously, you guys. EXPLOSION. HUGE shards of glass were scattered about 6 feet out to the left; tiny splinters coated everything within reach; Ben came running from the front of the apartment unsure of what he’d find… And what he found was me standing barefoot and perfectly still a few feet away from the stove, completely in shock at the fact that I wasn’t even scratched. He got my flip flops and the vacuum and we spent 45 minutes cleaning before I was able to return to making my humble little salad.

Anyway, I’m sure some of you have done this before, but a note from the idiot who did it most recently: PYREX DOES NOT GO IN THE BROILER. NO NO NO. IT WILL EXPLODE AND SCARE THE LIVING CRAP OUT OF YOU.

I’ll have you know, however, that after careful inspection I found that the peppers were salvageable, dammit! I peeled them and chopped up most of one of them for the salad (which would have been better off with the fresh, I think!) and sliced the other one up and put it in olive oil in a ziplock in the fridge for future consumption. 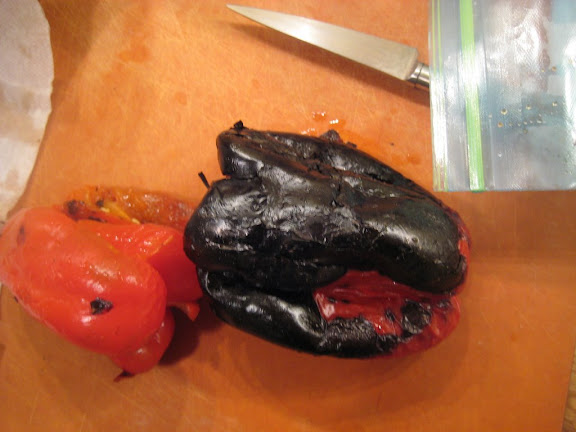 ANYWAY, the salad. The dressing included anchovies, capers, garlic, red wine vinegar and olive oil (and salt/pepper, of course), and I made it in the little mini-prep attachment to my stick blender, which worked great. 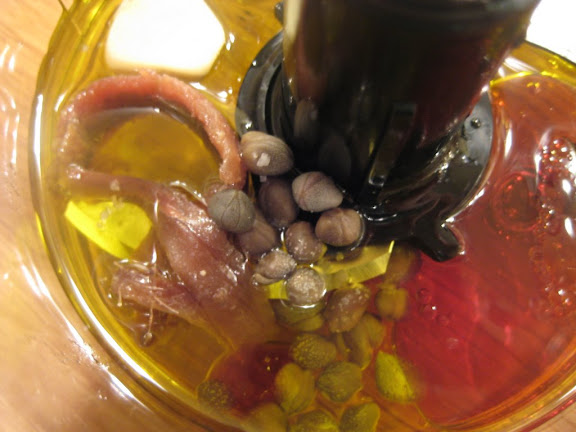 In the salad I included a cucumber, the three tomatoes, some finely chopped onion and the stupid roasted pepper (not pictured here). 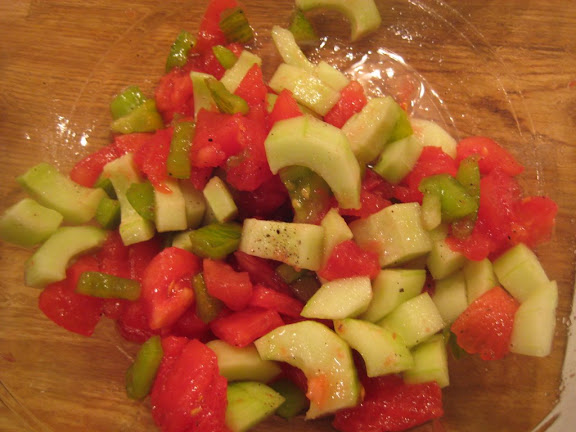 I cut up the bread and started by pan-frying it, per mom’s suggestion, but I got bored and the croutons weren’t hardening enough so I threw them in the oven to dry out more. Added them to the vegetables (which I’d prepped first and salted so they’d get nice and juicy), holding back enough vegetables and croutons (separately) for lunch the next day, since you don’t want to mix them too far ahead of serving. 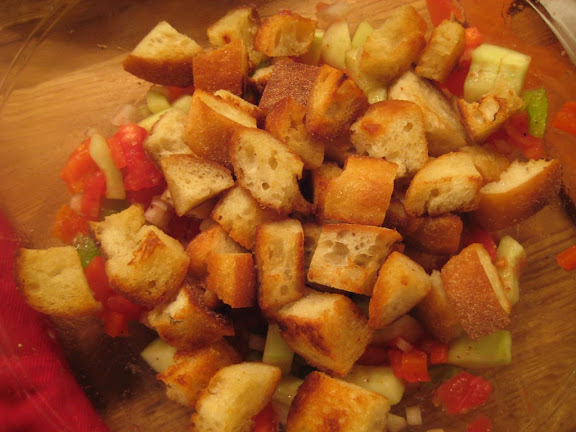 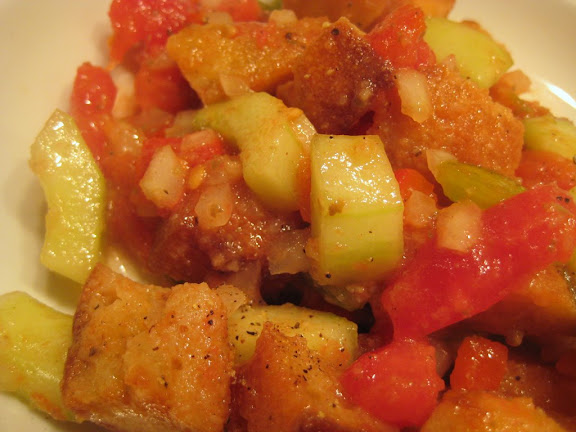 Quite soothing after the stressful and ridiculously prolonged prep.

I must say, I felt slightly better about my ridiculous mistake considering that Ben had acquired a new dome for the exposed light in the kitchen while I was in London, and when I came back I said “Um, I don’t think that is big enough; also won’t plastic melt if it’s pretty much touching light bulbs?” and he said “No, no, it’s fine,” and the same night as the pepper incident we looked up and the dome looked like this: 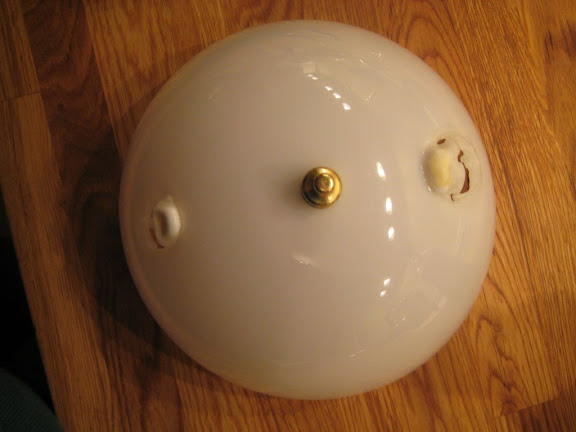 Common sense, you guys. I recommend it. And I’m looking for some, if you have extra.